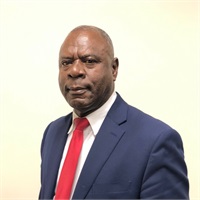 Delroy Cowan 67 years old, was born and educated in Jamaica. Mr. Cowan is from a small family of 4. After completing his education, he became a school teacher for a short while then went on to pursue his business career during which he developed and owned many successful businesses in Jamaica including a chain of over 25 tire stores as well as the largest ever amusement park, in the Caribbean.

Mr. Cowan migrated to the United States in 1991 where he developed a Television network known as Caribbean Satellite Network (CSN) that made Caribbean programs and music videos available by satellite to the entire United Sates as well as to the Caribbean, Central and South America. These programs were later used to transform, inspire and to create the successful television network now known as BET.

In 2012 he developed a bottle water company in Hallandale Florida that currently supplies Alkaline drinking water to numerous retail stores and supermarkets as well as to over 5000 homes in the South Florida area.

In 2015 Mr. Cowan was introduced to the Financial Services industry which has since become a passion of his based on his desire to help as many families as he can to become financially educated and to start planning for their financial future.

Mr. Cowan is also a licensed Helicopter Pilot and he enjoys having fun with friends and family. He thoroughly enjoys his role as a father, husband and friend, all of which has contributed to his successes over the years.

His plan for the years ahead is to carry on with his mission of helping as many people as he can to become financially independent through the opportunities that exist in the Financial Services industry both to earn as well as to learn how to plan for their financial future.